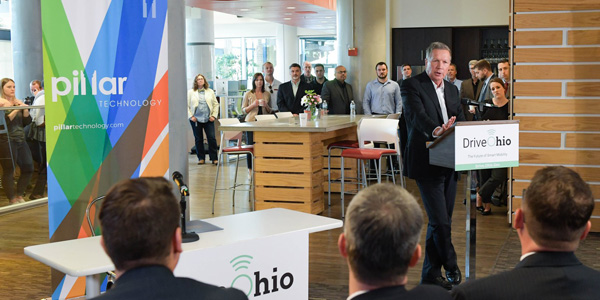 The executive order authorizes researchers to test on Ohio roadways as long as their vehicles meet certain safety requirements and are capable of complying with Ohio traffic regulations.

Ohio Gov. John Kasich announces his executive order on May 9 in Columbus.

The executive order authorizes researchers to test on Ohio roadways as long as their vehicles meet certain safety requirements and are capable of complying with Ohio traffic regulations.

Each vehicle must have a designated operator to monitor the vehicle at all times and to report any accidents that occur. The operator must be an employee of the company and must have a valid driver’s license, according to Kasich’s executive order.

“Ohio is well-positioned to lead in developing the cars of the future, and just as Wright Brothers did at Huffman Prairie, our great state stands ready to once again launch a new era in transportation,” said Kasich. “We have the diversity in weather and terrain that are essential to advancing these new technologies.  The sooner these vehicles are safely fine-tuned, the sooner they can make a significant reduction in the 40,000 traffic deaths we have in this country every year.”

The order requests that companies register their vehicles with Drive Ohio, which the state describes as “a one-stop shop for researchers, developers and manufacturers to collaborate on autonomous- and connected-vehicle initiatives in Ohio.”

The order also creates a voluntary pilot program to assist local governments in working with automotive and technology companies to advance technologies in their communities. Municipalities will have the opportunity to work with DriveOhio and create an inventory of testing locations that offer a variety of traffic and terrain scenarios, according to the Kasich.

“Already a leader in smart vehicle technology, Ohio is investing in infrastructure upgrades that will allow devices on roads and traffic-control signals to send critical travel and weather information to drivers,” according to Kasich’s news release on the executive order. “This infrastructure will also help improve emergency response times and will allow traffic managers to better manage congestion. Current initiatives already underway in Ohio include four smart road projects covering 164 miles of roadway, and two smart city projects.”