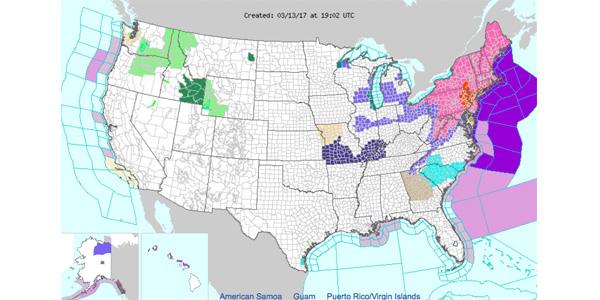 A nor’easter is brewing, and the National Weather Service is predicting heavy snowfall from the central Appalachians to New England, covering some of the most densely populated regions in the countr

A screenshot of the National Weather Service map at 3:02 p.m. Eastern time on Monday. Areas in pink were under a winter storm warning.

It could be a busy week for body shops.

A nor’easter is brewing, and the National Weather Service is predicting heavy snowfall from the central Appalachians to New England, covering some of the most densely populated regions in the country. Some areas could see more than a foot of snow.

As of Monday afternoon, the National Weather Service had issued a winter storm warning for a swath of the map that included Boston, Philadelphia, Baltimore and Washington, D.C., and a winter weather advisory for parts of Ohio, Michigan, Indiana, Illinois and Wisconsin.

“A very strong winter storm could be life-threatening for those who do not pay attention to safety precautions Tuesday morning,” the National Weather Service said. “Low pressure developing off the Carolina coast this evening will become an intense storm as it moves east of New Jersey midday Tuesday. Swaths of excessive precipitation will develop along and west of the track of the storm. Near-blizzard conditions are likely for a few hours in eastern Pennsylvania and portions of northern New Jersey, where snowfall rates of 2 to 4 inches per hour are expected.”

Will Stella Be a Boon to Body Shops?