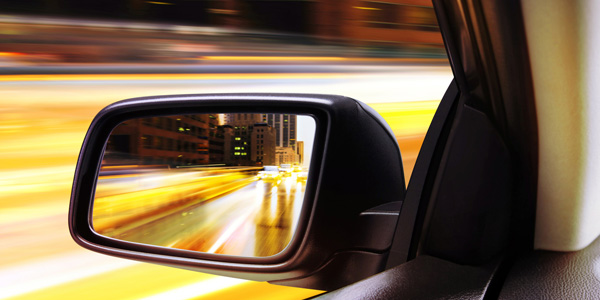 Rear-view and side-view mirrors will become increasingly sophisticated over the next decade, so much so that they might not exist as we know them today.

Rear-view and side-view mirrors will become increasingly sophisticated over the next decade, so much so that they might not exist as we know them today.

“Combining high-definition cameras and displays in place of – or to complement – traditional mirror designs offers a compelling case for automakers to improve on fuel efficiency and battery range, while increasing visibility and safety with high-value technology-driven content,” the business-information provider IHS Markit asserts in a new report.

In 2025, more than 1.8 million vehicles will be produced with side-view camera sensors to support drivers or contribute to automated driving systems, while more than 23 percent of these systems will completely shed the traditional side-view mirror, IHS Markit predicts.

The first production applications of rear-view display mirrors have been successful, with the substantially wider field of vision helping to eliminate blind spots from rear-seat occupants or roof pillars, the research firm notes.

General Motors was the first to market the technology in 2015 with the Cadillac brand before expanding to Chevrolet and upcoming Buick models.

However, other automakers are taking notice and making plans to bring similar solutions to market soon. Nissan announced plans to introduce the technology on the 2018 Armada, and other automakers soon will follow suit, IHS Markit predicts.

“A substantially wider field of vision also contributes to improved driver comfort and awareness,” IHS Markit explains. “The device also appeases regulators and drivers alike with a toggle to switch between a traditional reflective mirror and the camera view.”

With regulatory approval and early signs of customer acceptance, rear-view display mirrors are expected to reach nearly 1.8 million units produced annually in 2025, led by markets in Japan and North America, according to IHS Markit global forecasts.

While cost and complexity will limit the market to an extent, the opportunity for differentiation and improved visibility will attract a number of automakers, IHS Markit predicts.

Cameras a Viable Replacement for Side Mirrors

Implementation will not be uniform, however.

“Suppliers and automakers are investigating several different ways to replicate the camera view with an in-vehicle display,” says Brian Rhodes, automotive technology analyst with IHS Markit. “These side-view images could feed through an instrument cluster display of some sort, or even a traditional center stack display. However, the majority of concepts to this point have focused on new, dedicated side-view displays located either in the door panels or A-pillars because they offer the driver the most familiar line of sight for this safety-critical aspect of driving.”

Augmenting mirrors with cameras is common today, from familiar rear-camera park assist to applications such as Honda LaneWatch that enhance visibility.

“Current side-camera systems merely enhance the driver’s view today and provide marginal added safety as a result, but there is much more opportunity,” says Jeremy Carlson, principal automotive analyst with IHS Markit. “Camera sensors allow machine-vision software and artificial intelligence to constantly detect, track and recognize objects over a wide field of view, and that can be important input to autonomous driving solutions.”

“Alongside the autonomous use case, which has varying levels of interest from different automakers, improving aerodynamics will improve fuel efficiency no matter the fuel used – and that should be of interest to every automaker given regulatory pressures around the world today.”