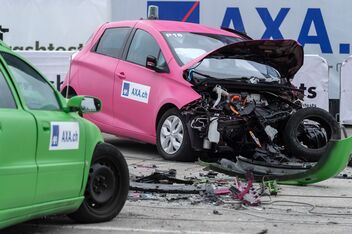 Today, there are around 25,000 electric cars, or e-cars, on the roads in Switzerland. This means that they are still outnumbered by gasoline-powered vehicles, but sales are rising rapidly. A representative survey by AXA of 1,000 Swiss shows that every third car driver can now envision buying an e-car in the future; this figure even rises to one in two drivers in the 18-24 age category. And e-car owners are unlikely to switch back, as 98 percent of e-car drivers would choose that type of model again, according to a survey of 340 e-car owners.

The rising number of e-cars on Swiss roads means that there will be more accidents in the future involving them. However, e-cars differ from conventional cars in several ways, and this also affects the general accident situation. AXA’s accident researchers used three crash tests to highlight specific risks associated with e-cars.

Initial evaluations of previous claims figures show that the claims frequency of e-cars is generally comparable to that of other cars. However, there are clear differences by vehicle class: while small e-cars in the microclass/small vehicle category generate around 10 percent fewer claims than conventionally powered cars of the same vehicle class, the claims frequency for larger, powerful models in the luxury car/SUV category is around 40 percent higher. One reason for this is the acceleration behavior of e-cars, according to accident researchers.

E-cars accelerate very quickly and with the same force, regardless of engine speed.

“Maximum acceleration is available immediately, whereas it even takes powerful combustion engines a moment longer before they reach their maximum acceleration,” said Bettina Zahnd, head of accident research & prevention at AXA. “This places new demands on drivers.”

Half of the e-car drivers surveyed also said that when they switched to an e-car, they had to change the way they drive due to the different braking and acceleration behavior.

The consequences of rapid acceleration, particularly with an inexperienced driver at the wheel, can be seen in AXA’s first crash test. The driver of an e-car is driving along a freeway and would like to accelerate slightly before a right-hand bend. The e-car accelerates faster than he expects, forcing the surprised driver out of his lane on the bend and into the opposite freeway. The oncoming car has no time to brake or swerve. The two vehicles collide head-on at approximately 45 mph.

Both cars are severely deformed. Although the drivers are protected as much as possible thanks to their seat belts and airbags, they can both be expected to sustain moderate to severe injuries.

“Being able to drive a car doesn’t necessarily mean you can drive any car. As well as classic driving lessons, specific knowledge of individual vehicle types is also becoming increasingly important. With e-cars in particular, drivers first have to get used to the different braking and acceleration behavior before they can safely use the vehicle”, said Zahnd.

An accident is similarly dangerous for the occupants of an e-car as it is for those in a conventionally powered vehicle. They undergo the same safety tests and are fitted with the same safety elements such as a rigid passenger cell and airbags. If there is a very heavy collision, an e-car’s high voltage unit will also be disabled to ensure that the vehicle is no longer under voltage.

Depending on the accident however, the batteries may become damaged and cause a fire. “Although e-cars do not burn more often than other vehicles, if a battery catches fire, it burns very quickly and is very difficult to extinguish”, says AXA accident researcher Bettina Zahnd. In these instances, it is important to free the occupants of the car as quickly as possible and get them to a safe distance to protect them from burns and toxic fumes.

Silent driving requires all road users to be more cautious

Another particular feature of e-cars is that they are very quiet. The engine in particular is almost silent when it is started –  this means that a seemingly safe maneuver can also cause an accident, as the second crash test shows.

The driver of an e-car reverses from a parking space just as an elderly woman with a walking frame is about to walk past the back of the car. The driver doesn’t see the woman, and as the engine is silent, the woman hasn’t noticed that the car has started to move. She is knocked down to the ground by the car. Even though the primary collision with the electric vehicle appears harmless, the elderly woman may suffer extremely serious injuries from an unfortunate fall.

Since July 2019, EU law requires all new types of hybrid and electric vehicles to be fitted with an acoustic vehicle alerting system (AVAS) to protect pedestrians. However, there is no requirement for older models to be retrofitted. “We advise the owners of a silent e-car to voluntarily fit their vehicle with a sound effect generator so that other road users can hear them,” said Zahnd.

99 out of 100 e-car drivers whose cars are fitted with autopilot say that they also use it, more than half frequently or all the time, most frequently on the highway and for longer distances.

However, increased automation also means a heightened risk of drivers over-relying on technology. Today there are already diverse cases of accidents that are assumed or known to have been caused by a driver’s over-reliance on a system. The third crash test demonstrates what can happen in these situations.

DAS are useful, but cannot replace the driver

The driver of an e-car is driving on the highway on auto-pilot which takes over the forward and sideways control. The driver relies on this technology and doesn’t pay attention – even though under current legislation he is required to concentrate on the traffic at all times. The assistance system reaches the limit of its capacities at a highway intersection and immediately gives the driving task back to the driver. The driver has to react immediately, but as he wasn’t paying attention, he reacts too late. The car collides head-on at approx. 100 km/h into a crash cushion. Although this absorbs more energy than a concrete bollard, for example, the driver can be expected to sustain moderate to serious injuries from this hefty collision.

“E-cars are generally just as safe as other vehicles. However, drivers and other road users must adapt to their special features and find the right way to handle them. The same applies to driver assistance systems. All systems currently available have to be monitored continuously. Although these systems act as a support, drivers must not become over-reliant on them so as not to endanger their own safety and that of others,” said Zahnd.

Advertisement
In this article:electric vehicles, insurers